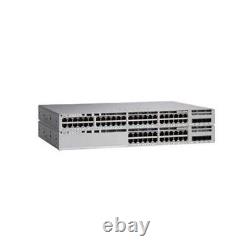 With its family pedigree, Catalyst 9200 Series switches offer simplicity without compromise - it is secure, always on, and IT simplified. As foundational building blocks for the Cisco Digital Network Architecture, Catalyst 9200 Series switches help customers simplify complexity, optimize IT, and reduce operational costs by leveraging intelligence, automation and human expertise that no other vendor can deliver regardless of where you are in the intent-based networking journey. Catalyst 9200 Series switches provide security features that protect the integrity of the hardware as well as the software and all data that flows through the switch. It provides resiliency that keeps your business up and running seamlessly.

Combine that with open APIs of Cisco IOS XE and programmability of the UADP ASIC technology, Catalyst 9200 Series switches give you what you need now with investment protection on future innovations. With full PoE+ capability, power and fan redundancy, stacking bandwidth up to 160 Gbps, modular uplinks, Layer 3 feature support, and cold patching, Catalyst 9200 Series switches are the industry's unparalleled solution with differentiated resiliency and progressive architecture for cost-effective branch-office access.

This item is in the category "Computers/Tablets & Networking\Enterprise Networking, Servers\Switches & Hubs\Network Switches". The seller is "it_space_technologies_ltd" and is located in this country: GB.

This item can be shipped worldwide.